(Note: Only point and shoot cameras were allowed at this event. I had to utilize a 10 year old 3MP Kodak.) 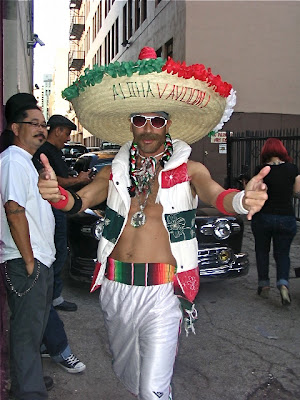 For those not familiar with the wildly fun spectacle that is,
Lucha Va Voom, I'll sum it up as a rockin' bawdy circus of Mexican wrestling, striptease and comedy. It takes place on the west coast (also in Chicago) in downtown Los Angeles at the beautiful-gaudy Mayan Theater. This 80+year old theater is the perfect venue for LVV---you'd think it was built specifically for it. 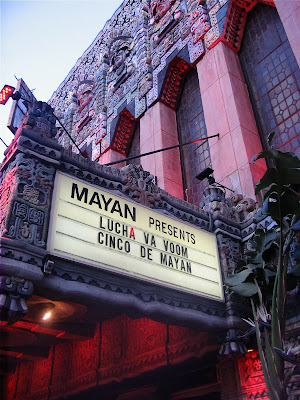 The Theater is a as much a character in the LVV show as one of the wrestlers and more legendary. The Mexican & Mayan themes were designed by a Mexican artist/archaeologist. The ceiling design is based on the Mayan Calendar and looks like something that would be featured in an Indiana Jones 2012 summer blockbuster where he battles Mayan demigods to prevent the end of the world. I'd see that movie. 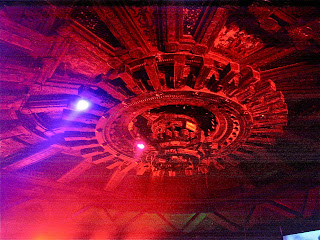 Legend has it that Marilyn Monroe once stripped at the Mayan. It's a known fact that "flesh flicks" were filmed there and for years it was a run-down venue for pornography. Now a couple times a year when it's not used as a nightclub it is the home of "Sexo y Violencia".
Perfecto! 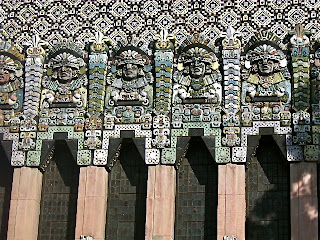 The pre-show begins outside the theater where the Vavoomers (my term) are chauffeured to the entrance by cool Kustom/traditional cars for their grand entrances. Naturally, I had to see and photograph this. 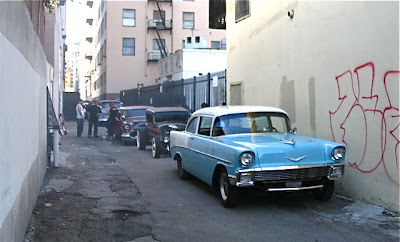 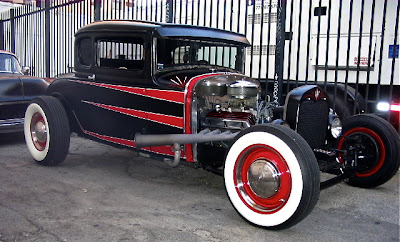 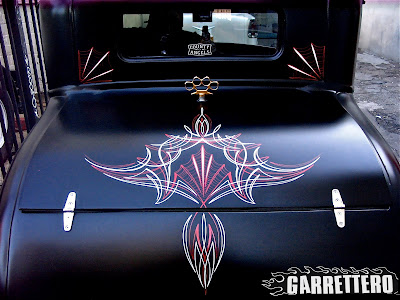 The car club handling the chauffeur duties was the Crusaders C.C. of Long Beach. They were also at the Viva Las Vegas Rockabilly Weekend event just a week prior (See previous 3 posts), however, I was told by one guy that he only remembers the ride home.


Me and my little point-&-shoot camera were treated kindly by the Vavoomers. I was able to sit in on a Spanish (language) TV interview. 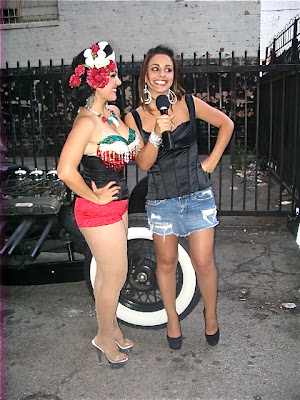 And the gang was happy to pose for some photos. 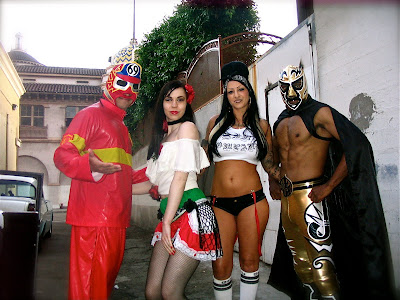 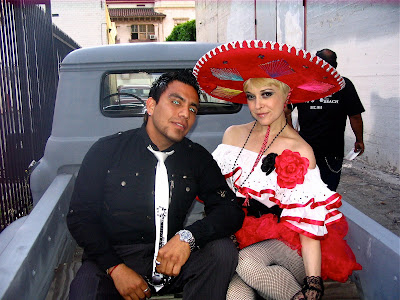 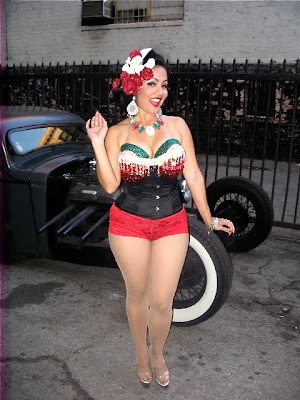 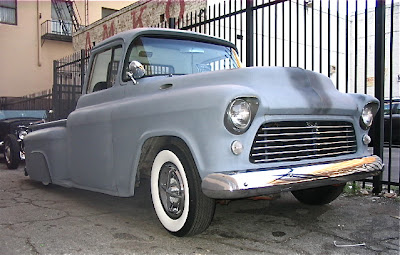 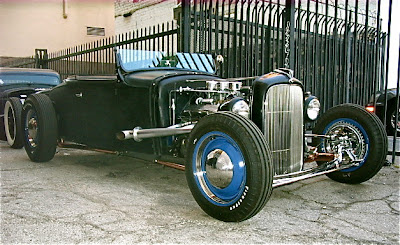 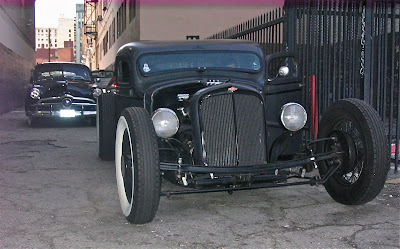 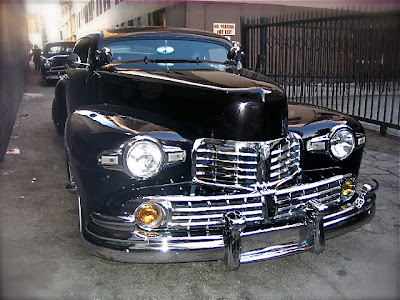 These two were not part of the show but like a handful of fans proudly donned their Lucha costumes. 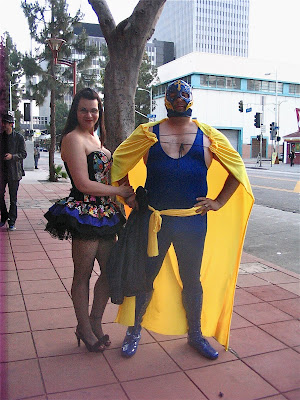 The show was sold out but it was comfortable in the seating area and it didn't take long at the bar to grab another round of beers and tequila. 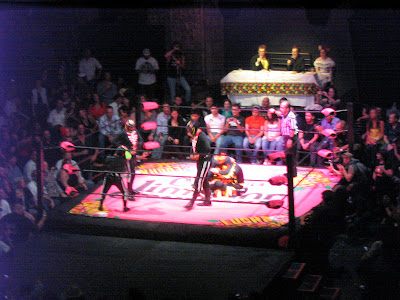 After the show I hustled to the stage area to get some photos. This is Lux LaCroix, she was the second act. She burst out on to the stage packing a machine gun and brought on the "sexo" full tilt. She rocked, stripped and teased the place to a frenzy. 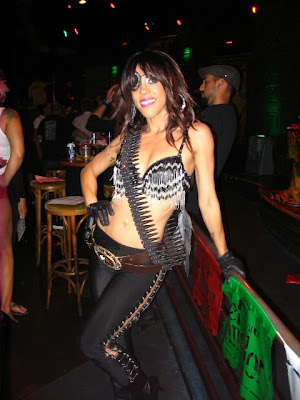 This is Leigh Acosta an amazing pole dancer. She's not some stripper from the corner topless bar, this lady is an artist! Incredible strength, rhythm, control and sensuality (sexo). She was the last act and wowed the theater. It was an amazing performance. I'm sure she can be found on YouTube doing her magic. 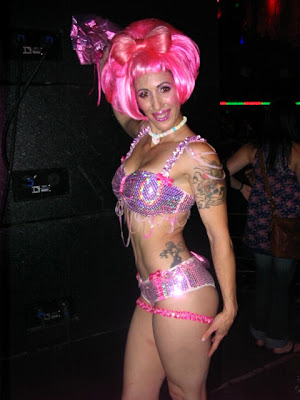 Here we have a pretty lady and Blaine Capatch, the very funny comedian/announcer. He had Tom Kenny, the voice of Sponge Bob, as his sidekick. It was oddly funny hearing Spongey curse. That's Drew Carry to the right. He was just there for the show. Capatch and Kenny kept the laughs coming with their play-by-play and intermittent shouts out of "LUCHA!!!" To which the crowd shouted back "VA VOOM!!!" 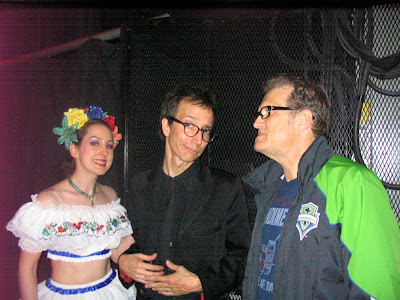 There was sooooo much more wrestling, dancing, stripping and teasing I just could not capture. I found this video, which though not the same show, captures the essence of Lucha Va Voom!


Here's a link to the Lucha Va Voom website. Their next show at the Mayan is in August. I hope to be there.
http://luchavavoom.com//
Hasta la vista! 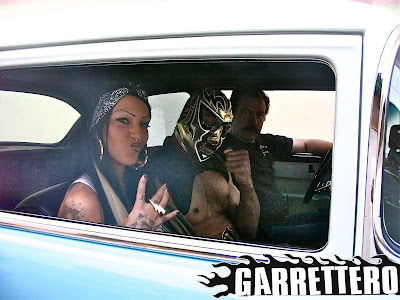