Whatta year!! It seemed to fly by, but I swear it held the longest summer ever. Somehow, Christmas managed to sneak up on me, but April and the Viva Las Vegas Rockabilly Weekender seems like forever ago. Even more recent than 'Viva'...I actually camped out in an RV at the LA Roadster Show  back on Father's Day weekend...I remember as though it was five years ago.
I guess it's a good thing I took photos.

2011 was a big year for this Garrettero thing I have going. I've met a lot of great people (ie Lisa, above), I was published and had my work appear on cool websites...also, I have photo shoots lined up for January 2012...there's 11 more months, contact me...

This collection of 2011 photos is not necessarily what I deem my best, or favorites (though many are) but also images of just plain' ol' good times. The above photo fits all those categories for me as will some other "new" images for "old" events I've covered here. Not going chronological...let's roll....

Since I'm going local right now...it's pretty DAMN COOL when one of your favorite bands is
from town!! 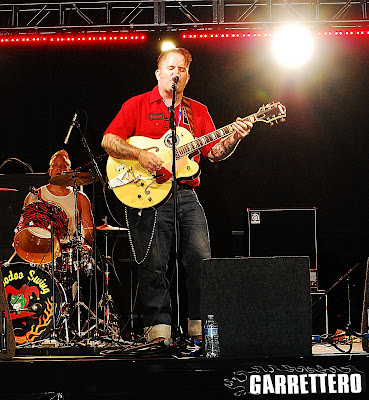 VOODOO SWING!! Buy their music, see them live!...Look them up on Facebook for gig dates--and to my European followers (yeah, there's a few) they're heading your way soon. If you're out of state and heading to the Viva Las Vegas Rockabilly Weekender 15 this April ---they will be rockin'
Brendan's Pub, with the other local favs, Moonlight Howlers.
Voodoo Swing on Facebook
KandyK Modela --- no segway to this, it was just time for another pretty shot.
But now that were back to the TRR... 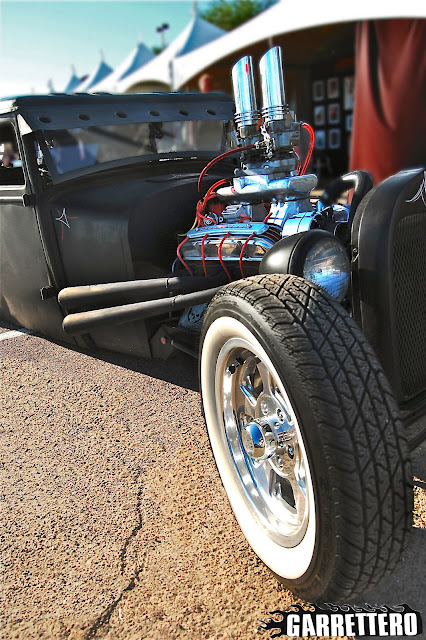 Here's Dave Huyck's very published (Rat Rod Magazine & Rebel Rodz..just in the last couple months)  and graced by Kandyk above...'26 Dodge. He surely doesn't need the exposure, but I like Dave, the truck and this photo.
Let's get Low & Slow....
There were plenty of great local lowrider shows and benefit/charity cruises in 2011.
Here's a shot of a couple Lucha Va Voom performers being chauffeured by the Crusaders C.C. of Long Beach, CA to the theater entrance. I wish I could take all of you to see a Lucha Va Voom show ----what a blast!!! 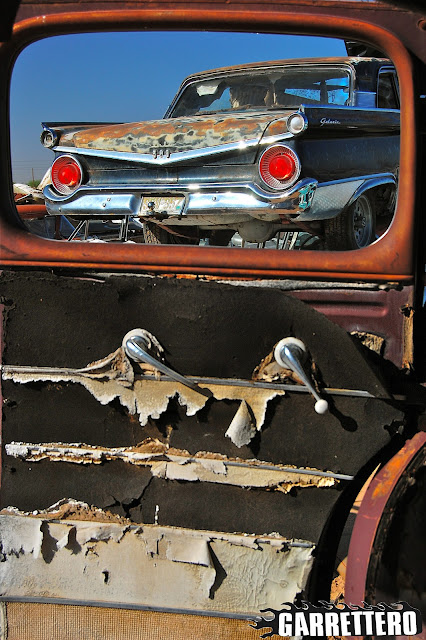 Here's a never-before seen shot taken at Desert Valley Auto Parts back in April. Going to pay the place another visit and do a full post this year for sure. 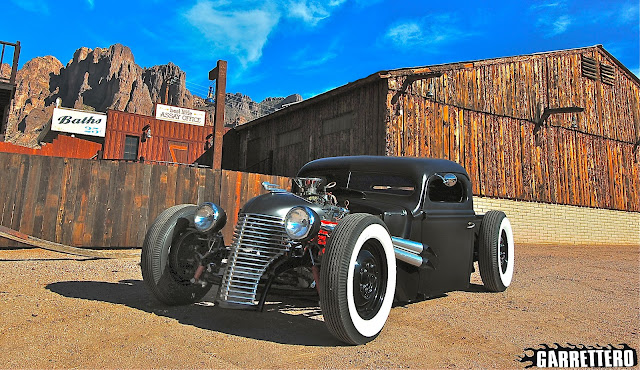 Here's the "F-Bomb", Bomb Squad C.C. member Brent Haines' home-built bad-ass truck. This was taken at a shoot we did back in October with the lovely Lisa Mortensen (top photo). The project is still pending...looking forward to releasing the rest of the photos and story this year!

A new cruise-in show started back in September at the Mesa Riverview ----no view of a river but plenty of cool cars for viewing. Pictured here is Brandon Hyslope's truck (L) and Adam Braton's rat rod (R). We're all hoping the show will start up again right quick! 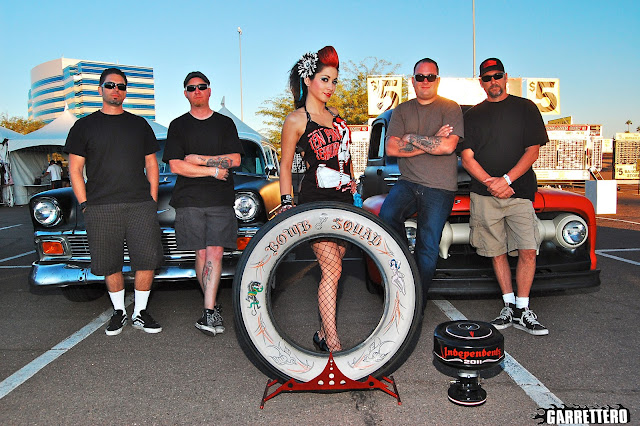 The Bomb Squad C.C. L-R, Paul, Kerry, Tom & Brent-- missing members, Rex & Richard. Taken at the TRR with the psychobilly pinup winner, "Fishnets" and their "Best Club" award. That was a great weekend with my buds!

It was breakfast burritos and beer for the 9:30am Moonlight Trio performance at the Ventura Nationals back in September. Then in November, they played the Hell City Saints 2nd Annual Blessing of the Rods party...seen below with Voodoo Swing's, Shorty Kreutz. GREAT TIMES!
There it is, my best attempt to sum up an amazing year of pursuing my passion for photography and the car scene. I met more cool and talented people last year than I ever could have imagined when I started "Garrettero" just over a year ago. And most rewarding, I have established friendships that I cherish.
Okay--now that I've hit a sappy level, I'm going to finally acknowledge my family.  I don't plaster images of my wife and kids here or on Facebook...but damn they are beautiful!! This site, nor my Facebook page are forums for family photos and updates ----but I'll say that I couldn't be more proud of my girl & boy (7&10) or more grateful for the support of my sweet, beautiful and understanding wife. Road trips to out of state shows are a blast, but coming home to my fun loving little family can't be beat.
I wish every one a great 2012!

It was a good year for the most part. It was nice to have met you as well! wishing you all the best in life and success in 2012!

Yes it was good to meet you and see your work!! Hope to see more of you this year and wish you the best!